Ataxia is a disabling and frustrating condition where people have the ability to move yet reduced control of the necessary balance and coordination to support their movement.

Cerebellar ataxia occurs as a result of damage to the areas of the Central Nervous System particularly concerned with coordination and balance, especially the cerebellum, due to head injury, stroke, Multiple Sclerosis or a number of other conditions. 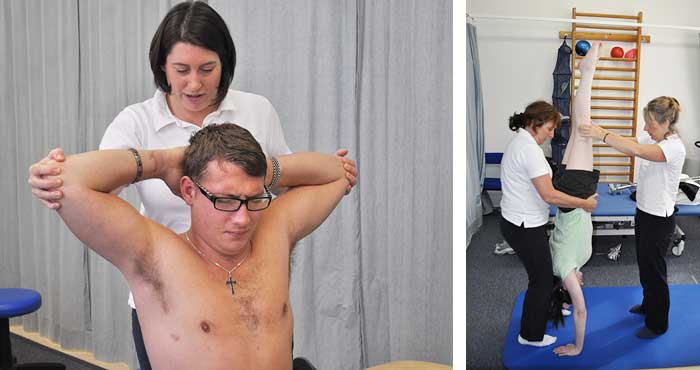 Cerebellar ataxia treatment therefore may be only one of a number of problems.

The individual may have difficulty walking or even standing due to balance problems. They may have difficulty in using their hands for previously, relatively simple tasks, such as feeding themselves, because of in-coordination and shaking. Visual co-ordination and/or dizziness are other frustrating factors which further challenge their independence.

A common problem in the treatment of cerebellar ataxia is that, as a result of fear of falling or failure to control limb movements, patients attempt to fixate themselves to feel still and safe and reduce the shaking. As a result they may become unnecessarily inactive leading to reduced fitness.

The therapists at Manchester Neurotherapy Centre are all experienced in treating patients using the Bobath concept. This treatment approach encourages movement rather than teaching fixation and often reveals potential to be more independent by a process of improving postural stability through experience of both independent movement and assisted movement. Therapy sessions may involve movements onto a mat on the floor so allowing safe and free movement with no fear of falling.

Physiotherapy plays an important part in helping individuals to learn how to control their posture and balance through experience of movement in a safe controlled environment. Many patients who are able to move more independently will also be taught how to fall more safely so that they have increased confidence moving around.

Each individual patient will have particular needs related to their cerebellar ataxia so an individually tailored programme will be made for them. Fundamentally most people can benefit from an assessment to discover how neuro physio can help maximise their independence.

“I heard from Switzerland that there is an excellent clinic of rehabilitation in Manchester (MNC) with a tremendous physiotherapist called Lynne Fletcher. Even my own therapist told me that she would like to be treated there in case a of brain trauma. In Canada (specialist of neurorehabilitation) they recommended the clinic and particularly Lynne. So I did the move to the U.K. and even my Swiss hospital sent an expert for seeing the Bobath Concept. I didn’t regret my choice to come to Manchester, Lynne and her team were fantastic!”